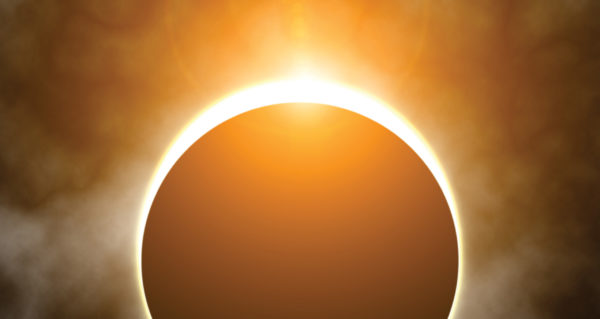 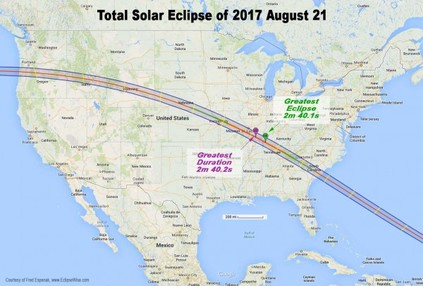 Ready for a wild card? On August 21, 2017, when the total eclipse of the sun, known as the Great American Solar Eclipse, sweeps across the continental United States at a furious speed of 1700 m.p.h., the shocking effects of its primordial shadow will be felt for months to come.

Visible from 9:03 a.m. to 11:37 a.m. PT, this rare cosmic event—the first coast-to-coast solar eclipse since 1918—will be nothing if not potent.  Beginning at the northern tip of Oregon, the eclipse will carve a river of shadow across the U.S., stirring up the cosmic dust of karmic memory and opening the floodgates to astral influences from the realm of spirit beyond.

In Vedic astrology, solar eclipses are said to accelerate social evolution, often through agitation, which may present as some kind of crisis or confusion. It’s no coincidence that the tragic events of Charlottesville unfolded around this time, or that the U.S. government seems to be teetering on the edge of breakdown.

Monday’s solar eclipse falls in the area of the sky known as Magha, the heart of Leo the lion. The magnanimous Magha is a generous and honorable star that holds the blessings of our ancestors and the powerful bonds of loyalty held within bloodlines. But Magha, called the “throne of kings,” is also the star of authoritarian power and nationalistic and racial pride—it also happens to be the rising birth star of the current American president. (Notice any similarities between the star’s name and the initials of Trump’s signature campaign slogan?)

This eclipse could spell trouble for Trump, already flailing, or possibly reboot his term with a twist that deeply shifts political norms in the US. Regardless of how the eclipse affects the chaos-prone leader, the disturbing current of intolerance that his campaign incited may well continue to unfold for years to come. 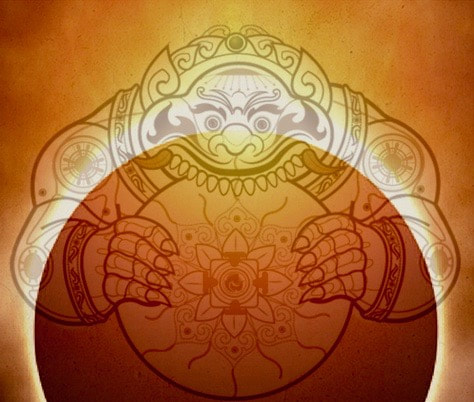 Rahu eats the Sun in a solar eclipse
According to Vedic tradition, Rahu is the head of the shadow snake that causes eclipses. The proud and rebellious snake demon has long been feared for the circus of illusion and ego he brings with him. Capable of bending minds and distorting perception, Rahu can stoke irrational fears and hatreds that have been kept buried for decades.

To frame Rahu’s influence in a positive light, repressed feelings that have long lurked in the shadows are now being exposed so that they can finally be understood. It may be a rude awakening for those of us unaccustomed to seeing the face of intolerance and prejudice on display, but better it be seen than continue to lurk in the shadows. Only light can dispel the darkness.

With the further destabilizing influence of Mercury in retrograde and the added fuel of fiery Mars, it’s best to avoid making any major decisions or signing important documents around this time. Tune into your intuition and take it easy on yourself. This is a great time to go for a long walk in nature, swim in rivers and other natural settings, or treat yourself to a hot bath with lavender oil.

It’s worth considering that Vedic astrologers traditionally recommend staying indoors and closing the blinds while the shadow passes overhead. But, if you are planning to observe the once in a lifetime display anyway, be sure to use eye protection, do not cook or eat under the shadow, and wear light colored clothing.

On a personal level, confusing situations and troubled feelings stirred up by Rahu’s shadow will only arise because they are ready to be cleared. While this may be a difficult period to navigate, if you can steady yourself in the storm through spiritual practice—prayer and meditation are especially potent around this time—you may find yourself feeling much lighter and freer on the other side.

Find out more about how the solar eclipse will affect you. Check out the Great American Solar Eclipse Webinar with eclipse readings for your sign!

To fully understand how these astrological influences affect you on a personal level, book a one-on-one Vedic Astrology Reading with me here.
Share1K
Tweet
Pin
1K Shares
PrevPrevious
NextNext